If It Weren't for You: A Tribute to Walt Wilkins (Fundraiser) 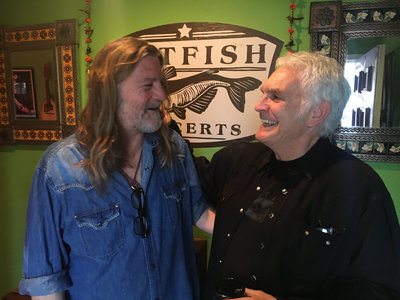 Hi there! We are currently in pre-production for a very special Eight 30 Records project: If It Weren't for You: A Tribute to Walt Wilkins! We love Walt and his songs and know so many of you do, too. Walt has practically built up our record label and Catfish Concerts house concert series with us over the last seven years, plus he has known Jenni her entire life and was dear friends with her legendary father Kent. “I tell everybody everywhere that Walt is the most spiritual singer in the world today except for maybe Willie Nelson,” Kent told Jenni in an interview for our book Kent Finlay, Dreamer: The Musical Legacy behind Cheatham Street Warehouse. “Actually, I think they are equals.”

We agree and want to show the world exactly how much Walt's respected by his songwriting peers with this tribute. He's a singular songwriter, incredible friend and all around good dude. That brings us to If It Weren't for You: A Tribute to Walt Wilkins. Up until now, we’ve put our own money into making our tribute records (including all our savings, rainy day emergency funds and everything we can find under the couch cushions). Frankly, we finally burned through all our personal means putting together our most recent album The Messenger: A Tribute to Ray Wylie Hubbard. Bottom line: We’ve set a funding goal for the Walt tribute at $50,000. Your help would make a huge dent and we will be very grateful for any contributions you see fit to offer, even as little as $5 toward the cause.

Fact is, making a record costs a lot of money. The amounts vary from project to project, but here are the rough amounts for the Walt tribute. The studio and engineer cost about $8000. We are paying all of the performers and artists – which isn’t typical but is RIGHT – and that’s another $10,000. Mixing and mastering will probably be in the $6,000 range. Travel for players and producers from Austin and Nashville and points between probably will be $5,000 and up. Then you have to press CDs, which is anywhere from $2,000-$5,000. After all that, there is back-end money to be spent on art design, packaging, promotion and publicity. Ring up at least another $15,000. Your support will mean everything to us – not to mention Walt! – and seriously will help the cause. Thank you so much in advance!

We will be recording If It Weren't for You: A Tribute to Walt Wilkins with your help throughout 2020 and plan to release the album in early 2021. Check back for updates! We think you're gonna love this one!